Since August 2022 there have been growing signs that the Iranian Air Force is set to acquire the Russian Su-35 ‘4++ generation’ heavyweight fighter to modernise its fleet, with the service’s commander  General Hamid Vahedi having announced on September 4 that such acquisitions were under consideration. U.S. officials subsequently indicated on December 9 that Iranian pilots had begun training to operate the aircraft earlier in the year, and that deliveries would begin as early as 2023.

Iran is expected to acquire 64 Su-35s under a $5 billion contract, with much of the costs reportedly offset by Russia’s expenditures on Iranian drones which have played a key role in its ongoing war effort against Ukraine and its NATO allies. The apparent choice of the Su-35 follows over a decade of speculation as the what kind of fighter the Iranian Air Force could acquire to modernise its largely Vietnam War era fleet, with the lower and Russian Su-30 having been considered a frontrunner in the 2010s while from 2020 the much lighter but more sophisticated Chinese J-10C was seen as a more likely option. Although the Su-35 is a capable fighter, and currently the most advanced in Russia to be fielded at squadron level strength, whether it was the best choice for the Iranian Air Force remains in question with several other options having been available with various strengths and shortcomings. A look at the five leading competitors to the Su-35 for Iranian contracts and their various advantages and drawbacks is given below. The most sophisticated Chinese fighter class yet to be exported, the J-10C was previously seen as the leading candidate to modernise the Iranian fighter fleet and is considered a more advanced aircraft than the Su-35 with significantly lower operational costs and maintenance needs. As a lightweight relatively inexpensive fighter the aircraft could be acquired in significantly larger numbers, and other than the American F-35 it is considered the most dangerous single engine fighter in the world with its sensors, high composite airframe, option for thrust vectoring, network centric capabilities, and armaments, all making it stand out against competing designs. The J-10C is produced at a much greater rate than any other fighter in the world other than the F-35, allowing China to deliver dozens to its export clients per year as seen with the fulfilment of Pakistani orders in 2022 – with all 36 ordered expected to be delivered within 18 months. The obsolescence of the current Iranian fleet, as well as its sheer size at close to 20 squadrons, means the J-10C could have been the ideal candidate and may well still be in future to serve as a lighter counterpart to the Su-35. The fighter lacks the Su-35’s very long range, its access to a very large radar, its use of triple radars, or its option to integrate extreme range oversized R-37M air to air missiles, but perhaps most importantly it is unlikely to be offered as part of a barter agreement as the Su-35 reportedly was. While China is currently the only country other than the U.S. to field indigenous fifth generate fighters at squadron level strength, with the J-20 stealth fighter in many respects being unrivalled in its performance, a lighter medium weight counterpart to the J-20 was developed under the FC-31 program both as a navalised derivative for carrier operations and as a fighter for export. The FC-31 is considered a leading contender to replace the F-15 Eagle fleet of Iran’s regional rival Saudi Arabia as Riyadh and Beijing strengthen ties, which could be a factor leading both Iran and China to avoid making a deal for the aircraft. The fact that the FC-31 is not currently in serial production on a significant scale also means deliveries would occur much later than those of the Su-35 could, which could be decisive considering that Iran currently faces a significant threat of Western or Israeli strikes on its nuclear facilities. The FC-31 was designed as a successor to the Su-27 Flanker family of aircraft to which the Su-35 belongs, and introduces stealth capabilities and more advanced sensors, avionics and weaponry. It is expected to be able to incorporate upgrades for considerably longer including eventually sixth generation technologies, as China and the United States have emerged effectively in a league of their own competing to field advanced sixth generation fighters. A successor to the Su-27 Flanker family developed for the Russian Air Force, the Su-57 was initially intended to make up the bulk of new fighter acquisitions from 2015 before the service decided to instead acquire lower end Su-30SMs and Su-35s. The fifth generation fighter has seen combat over Ukraine and is the only one of its generation to have employed standoff cruise missiles in combat, with an air to air kill also reported but unconfirmed. The fighter is not as specialised in an air to air role as the Su-35, and benefits from stealth capabilities – albeit inferior to those of Chinese or American jets – as well as an even longer range and use of sextuple radars improving on the Su-35’s triple radars. The fighter’s emergence onto export markets was long expected to seriously reduce foreign interest in the Su-30 and Su-35, with the Su-57 expected to remain viable for many decades longer as Russia invests heavily in developing sixth generation technologies for its fleet. The fact that the Su-57 is currently being produced on a relatively small scale, Russia’s inability to make rapid deliveries due to domestic and possibly Algerian orders, and questionable readiness for high intensity combat, are the fighter’s main disadvantages against the Su-35 which can be delivered very quickly and which has been fully ready for combat for close to a decade. China’s ‘very light’ fighter developed to be even more affordable than the J-10C both to acquire and to operate, while benefitting from fifth generation level avionics comparable to those of the J-20 and J-10C, the JF-17 Block 3 is expected to be produced in far larger numbers than prior variants and provides perhaps the least costly means to field a large fleet with state of the art avionics and weapons. The fighter has a modest flight performance and carries a relatively small sensors, and is broadly equivalent to the Swedish Gripen in its design philosophy and position on the weight range. The fighter could allow Iran to replace its F-4 and F-5 fighter squadrons acquired in the 1970s while also reducing each squadron’s operational costs – with the acquisition thus potentially paying for itself. Although not the most capable fighter, the JF-17 Block 3’s highly sophisticated avionics, sensors and missiles would provide it with a strong advantage over most fighter classes Iran could face – including Israeli F-16s and F-15s which still use mechanically scanned array radars, often lack high off boresight missile targeting capabilities, and at times still rely on Cold War era missiles without active radar guidance. Replacing half or more of Iran’s fighter squadrons with JF-17 Block 3s could be relatively affordable, if not cost saving in the long term, and would revolutionise the air defence capabilities of the fleet. JF-17 Block 3 acquisitions remain possible after a Su-35 deal to serve as a lighter counterpart. 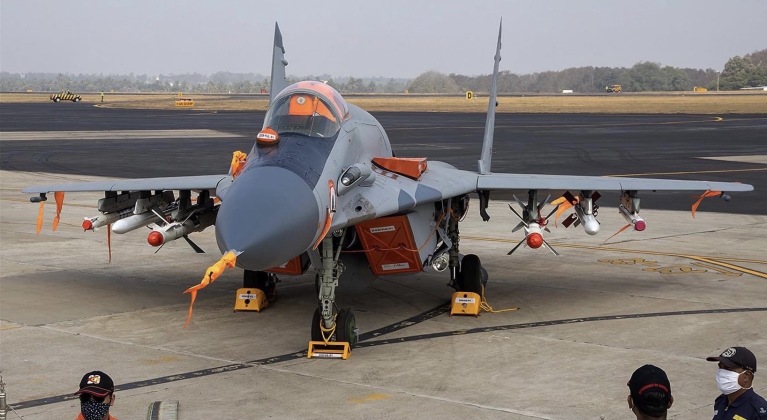 Russia currently offers two main kinds of modernised MiG-29 fighters for export, including the MiG-29M/K which uses a new airframe design, and older Soviet built MiG-29s which can be modernised with the same engines, avionics and sensors under the MiG-29SMT and MiG-29UPG programs. Integrating active radar guided missiles and phased array radars – either the widely used Zhuk-ME PESA radar or the newer Zhuk-A/AM AESA radar – either kind of MiG-29 could revolutionise the Iranian fleet. The fighters could be delivered quickly and provide a mid level capability above the JF-17 Block 3 – albeit with less cutting edge avionics and weapons – and below the Su-27/30/35 Flanker family. Russia exported MiG-29M fighters for approximately half the price of the Su-35S, and modernised older MiG-29s similar to the Indian MiG-29UPG, and perhaps integrating the superior Zhuk-A/AM for maximum performance against stealth targets, could be acquired far more cheaply still. A $5 billion contract could be sufficient to replace more than half the Iranian Air Force’s fighter squadrons with MiG-29SMT/UPG fighters, while the country’s currently operational two MiG-29 squadrons could be brought up to a similar standard if not replaced. The old Soviet era MiG-29A is currently considered an elite fighter in Iran despite its age, with squadrons relied on heavily to guard the capital Tehran, and Iran’s defence sector has gained considerable experience producing parts for and upgrading the aircraft. Although shorter ranged than the Su-35, for air defence duties the MiG-29 retains an impressive flight performance which paired with the advanced avionics available could provide a highly cost effective option. The MiG-29SMT/UPG is unlikely to be as cost effective as the J-10C and JF-17 Block 3 due to Russia’s smaller combat aviation industry and less advanced industries, but the aircraft could potentially have been bartered for Iranian drones similarly to the Su-35 and and in a way than Chinese fighters cannot be.